Another hectic week in the bag. Sal Lyden my buddy from Uni was in town so we had dinner at Dim Sum and some cheeky cocktails. OMG YUM. I was the size of a house walking through Soho. Was lovely to see her.

Tuesday went to a studio to sing some bvs for the producer/drummer dude. I studpidly decided to ride cause I wanted to go to Greg’s after to pick up a cd with Ricocheted goodies on it. I had to pull over and take my coat, scarf and shirt off on the Highbury & Islington “hill”. I don’t care what you say, it’s a hill.

Macks tracks were cool. He mainly wanted me to mask his voice cause he reckons singing’s not his strongest point – he is English. He is a man. After the first few takes I thought, what the f have I got myself into? I am down the river without a paddle. Some of his suggestions were “don’t think about the melody. There is no melody”.  And, I have never spoke/sung before – mainly cause I sound like a tosser.

But by the end of the night, no joke, I sounded exactly like him. I couldn’t believe that voice was coming outta my head. I say this hopefully with a bit of modesty, but I am actually quite proud I pulled it off, cause it was looking preeeeetty grim there for a while.

Wednesday my work took us out for free dinner and drinks cause of all the overtime we’d been doing. We used and abused and it was a cracker of a night. Cocktails, appetisers, starters, mains, desserts, wine, after dinner coffees/baileys/whiskeys. Once again I was the size of a house on the bus home.

Thursday someone stole the left handlebar grip off my bike 😦 DEVO.  Who just takes the one?  Then on the way to the gig with Keith I couldn’t find my oyster card and realised I’d had it in my pocket when I rode home from work – and had lost it.

I had a mini freak out. Not about the oyster so much, but cause sometimes I commit to too much and life starts to slip through my fingers. But I played my gig at The Troubadour and it was such fun! It was the third time I’ve played there and it’s always a good gig. The audience were really attentive and appreciative and I played Heartbreaker and Hey You (new ones) with a good response. Two friends of Keith, my manager, came along who had seen me play my first gig in London. They asked Keith if I was the same girl who sang the first time and said I’d really come a long way. This made my night, cause you don’t feel the progression yourself, so it’s nice to to get some encouragement and confirmation that you’re heading in the right direction. (Is that a lyric?)

Friday went on a bar crawl with Essy, Luke and Kel to Paramount, Lounge Lovers, Crazy Bear and The Sanderson Hotel. While you live in London, you always have lists and lists of places you want to go, and things you want to do. So we’ve checked a few off. Paramount is a members club – Luke is apparentlya movie producer 😉 – and it has the most wonderful view of London. We got a jug of Pimms and took photos near the window..  bahaha smooth.

Saturday went to Kent for a friend from work’s wedding. She looked amazing, and they sang gospel songs and I didn’t even cry. Took me three hours to get home. Not okay.

Went with Nick to see his bro’s band play in Holborn. http://www.myspace.com/tommckeanandtheemperors I was really impressed. They are really really good. The guy supporting was amazing too (standby for name) You could’ve heard a pin drop. Got invited back for a little partay with the band and they did some more songs for us.

Had brunch out, rode my bike to Chalk Farm to meet Luke, Bob, Es, and Kel at another place on Luke’s list. Apparently Kate Moss goes there. She was not there.

Thought I’d be sweet cause I’d walked home from Camden along the canal, but I obviously paid no attention whatsoever cause I got to Angel and had to detour off the canal cause of refurbs to the path. It started to spit as I guessed where I thought the canal was, and I was wearing ballet flats, a dress and my new swede bag (who buys swede in London?) Thought I’d keep riding blind cause as most of you know, I’m am quite the eagle. I ended up around Caledonia Road as the rain got a little heavier, I kept going, ended up near more roadwork in Kings Cross, called Luke, left a slightly distrest voicemail and kept riding. By this stage I’m a little damp – from the rain? From the sweat? From the tears? (no there were no tears) then out in the distance I see a stairway to the canal!! So I rode the rest of the way along the canal and made it there after pushing the bike through the sea of people at Camden Lock. Pretty sure I scraped a few calf muscles with the old pedals ahah.

Cause I’d just had brunch a few hours earlier, I just ordered a bowl of spinich. But then we got cupcakes after and rode my bike around the streets and doubled merely missing Mercs and Range Rovers. The ride home was easier and I’ve taken notes of streets and turns so I can do it again with confidence. Needless to say, my thighs, arse, shoulders and groin are bleeding. 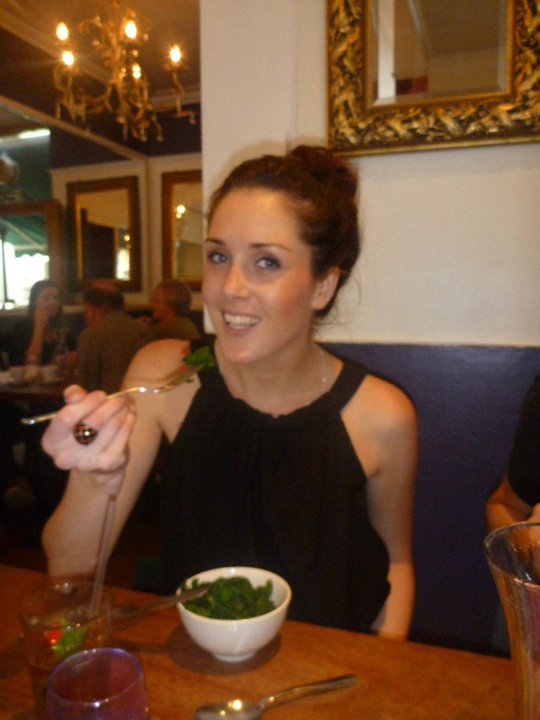 Cooked  dinner with the flatties and got a relatively early night.

Monday we had a goodbye dinner at Jamie’s Kitchen for Kel as so flew back down under and we had to say goodbye 😦 I miss you already.. the burn is deeeep. Then, cause you do, we went and had half price martini’s on a Monday night.

I cooked my flatmates Mum style Burritos and no ones locked themselves in the loo, which is a great sign. I made chicken in sweet chilli sauce, cut up cucumber, cheese, avo, tomato, and put them in a wrap with philly and sweet chilli and they loved them. I kinda enjoyed making them too, so I’m going to try rissoles next. (tee hee)

Now I realise that I’ve left it too long and therefore skim on details so I will try my hardest to get my life in order and deliver a blog to you more often.

Jonathan Boulet! Get his albums off itunes.. so good   http://www.myspace.com/jonathanboulet

3 Replies to “Getcha Head in the Game”